Home »News»LGBTQ+ Pride is for the Church Too

LGBTQ+ Pride is for the Church Too

by the Peacemaking and Social Justice Committee 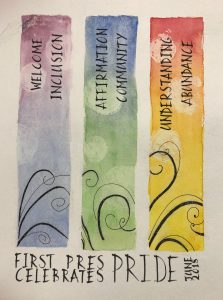 At 1:20 am, on June 28, 1969, police raided the Stonewall Inn, in New York City–a safe space for gays, lesbians, transgender, and many of the poorest and most marginalized citizens. The legal system, at the time, was bent on entrapping, harassing, and criminalizing anyone who was, or associated with, gay, lesbian, and transgender people. Tired of this system of injustice and oppression, patrons and neighbors of the Stonewall Inn fought back. This event triggered six nights of riots against police forces, who were deliberately targeting the LGBTQ+ community—these riots became known as the Stonewall riots.

Peaceful demonstrations and marches have been held annually around June 28th to commemorate the events at the Stonewall Inn, the day that the LGBTQ+ community proclaimed its right to freely congregate and exist in public spaces. Fast forward to 2012, President Obama officially declared the month of June to be Lesbian, Gay, Bisexual, and Transgender Pride Month in the United States. While these events were indigenous to the US, LGBTQ+ Pride is now celebrated around the world at various times of the year.

Pride is not just for the LGBTQ+ community, but for family, friends, and all allies, too. The Church can also support and celebrate our LGBTQ+ brothers and sisters in Christ, who seek to fully live out their lives, and who pursue the Church’s mission of peace and justice. One, visible, way you can show your support is by attending Pride Parades and events in DC, June 9th-10th, or Baltimore, June 16th-17th.

Furthermore, several organizations within the PCUSA and the body of Christ work with congregations and communities for the full inclusion and affirmation of LGBTQ+ Christians. During this season of Pride, consider educating yourself about the work of the Church within our denomination and the church universal.

Most importantly, our church family can make every effort to be welcoming and affirming during the season of Pride and throughout the year. We are all part of the body of Christ!

*Our congregation values inclusion and affirmation across faith experiences, racial identity, sexual orientation, gender expressions, and cultural backgrounds.  To that end, we will be observing Pride Month during the month of June, culminating in Pride Sunday on June 24.  Watch Tidings and First Day for events offered both by First Church and the community.

A tree unfolds its full autumn colors, in the front lawn outside the church building.

THE EMERGENCY SCHEDULE IS CURRENTLY IN EFFECT UNTIL FURTHER NOTICE.

You can use this button to make your contribution to the Church via PayPal. You do not need to have a PayPal account.


If you wish, you can specify a purpose for your contribution in the "write a note" line of the PayPal information.

Find Us on Social Media